Everyone follows the "Consumer Decision-Making Process" whether they're aware of it or not; it may not be in order but it is still followed. In fact, the consumer may end the process at any time or may not even make a purchase at all. Throughout this blog, I will be using The Lion King 3D which was released in theaters on September 16, 2011 for only two weeks as the product to demonstrate how a Disney consumer will typically use the Consumer Decision-Making Process without even knowing it. 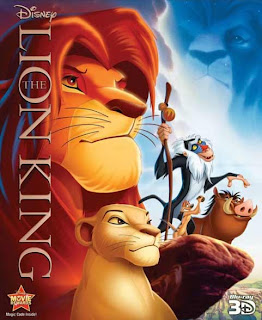 The first stage in this process is the need recognition which is always a desired need when it comes to Disney products. This "need" can be triggered by external stimuli through immense advertising or positive reviews. The second stage is information search which in this case it's internal because of all the good memories consumers have of the original film "The Lion King" released seventeen years ago. The information source is nonmarketing-controlled due to personal experiences. Most Disney consumers are the parents, not the actual kids who want to watch these films. Therefore these parents end up considering watching these films because Disney never failed them as a child.

The next stage is evaluation of alternatives which helps the consumer ultimately make their decision in whether they are going to buy the product or not. The Walt Disney Company's biggest competition is The Warner Bros. In this case, consumers compared Disney's "The Lion King 3D" to the Warner Bros' "Dolphin Tale" before making their final decision. The fourth stage is purchasing. Most of Disney's films are unplanned purchases due to the consumer not knowing about the upcoming film until seeing a preview or advertisement - therefore the consumer buys on impulse.

The final stage of this process is the postpurchase behavior which is the certain outcome these consumers expect from their purchase. According to the Box Office Report The Lion King 3D ruled the box office for the second weekend in a row with $22.1 million coming in first place, followed by Moneyball - $20.6 million, and Dolphin Tale - $20.3 million. It appears that four new movie releases were no match for the Disney classic and because of this success Disney is planning on extending what was originally intended to be just a two week release. It is quite clear that Disney consumers are more than satisfied with the film and their expectations were beyond exceeded.

Posted by The Walt Disney Company at 10:22 PM