The Walt Disney Company is all about satisfying their customers with consumer products, whether they are individual consumers or big corporations. Disney frequently engages in business marketing and is very open about this, they even have their own Business to Business page on their website indicating ways on how an organization can "do business" with them as well. This page is made up of six categories, these categories include: Advertise With Us; Travel Agents Only; Disney Studio Operations; Disney Meetings & Conventions; Disney Insititute; and Supplier Information.

The company's business customers are mainly re-sellers such as Toys R Us and Party City, who sell Disney's wholesale items. Toys R Us sells Disney branded toys from their various product lines such as "Disney Princesses" and "Disney Fairies", as does Party City with party decorations imprinted with Disney characters on them such as balloons, plates, cups, piñatas, party favors, and so on. These are just a few of the many re-sellers who have become Disney's regular business customers. 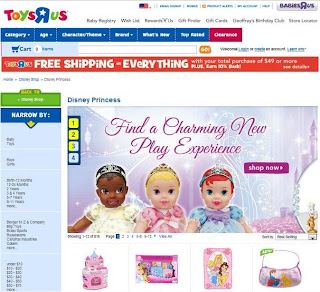 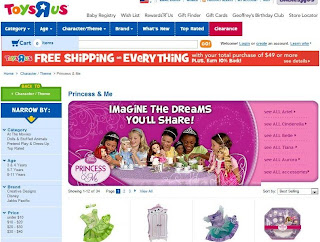 Although Disney participates in business-to-business commerce, the company is often credited for their relationship marketing skills. Disney is really big on building long-term relationships with customers, both consumers and businesses. They show this by forming many strategic alliances. Disney's studio entertainment division's alliances are the Prospect Studios, the Golden Oak Ranch, and KABC7's Studio B. These studios provide the setting for most of Disney's productions, including films, tv shows, and even their commercials. Disney used to have so many alliances, until the company decided to buy out almost all of them. For instance, Touchstone Pictures, Hollywood Pictures, and Pixar were the company's top three partners who were always involved in the latest Disney films but Disney depended on them so much that they decided to buy them all out instead. Thereby, turning these companies from well trusted partners to Disney property.

In addition, Disney is also starting to partake in business-to-business (B2B) e-commerce in order to advance their internet marketing. So far they have done a great job by forming a joint venture with Hulu, one of the top streaming websites to surf the web. Disney has progressed so much in the e-commerce field that the company's ABC Television Group division currently owns 27% of Hulu. As you can see, Disney continues to be in its prime and will continue to successfully achieve its goals and sell to its individual consumers and to its business customers as well. I am sure that Walt Disney himself would be so proud of what his company has become today.


"Get a good idea and stay with it. Dog it, and work it until it's done and done right." —Walt Disney
Posted by The Walt Disney Company at 2:15 AM 17 comments:

“There are three kinds of companies: those that make things happen, those that watch things happen, and the rest who wonder what happened.” - Anonymous
Now it is obvious which kind the Walt Disney Company is, this is due to their market segmentation. Market segmentation helps marketers define customer needs and wants more precisely. Disney uses geographic, demographic, and psychographic segmentation to locate their target market. Geographic segmentation refers to a region of a country or the world, market size, market density, or climate; this is used for the location of Disney's theme parks such as Disneyland and Disney World which are strategically located in the world's most visited places: Europe, Japan, India, and of course the United States. Demographic segmentation refers to age, gender, income, ethnic background, and family life cycle; this is used to help determine where to place their chain stores called the Disney Store, where to distribute their movies, and even determines what kind of movie they should create next. Psychographic segmentation is based on personality, motives, lifestyles and geodemographics; this is also used to help Disney determine who is going to buy more of their products.
Disney mainly targets children and their families, it uses the multisegment targeting strategy which is when a firm chooses to serve two or more well-defined market segments. Disney intrigues people of all ages; whether it is a child, teen, or parent. For small children, it has its animation films, toys and other goods from their consumer products division, a segment on their channel called "Playhouse Disney," and many more. For older kids such as tweens and teens, it has the Disney Channel, Radio Disney, their live-action films, and much more. Disney's live-action films such as Pirates of the Caribbean attracts adults as well, in order to target adults Disney uses a "family approach." Disney theme parks were built for the whole family to enjoy and they do a fine job stressing that. If you pay close attention to their advertisements you will see that they are not always aimed for children, in fact they are aimed at the parents most of the time with little phrases such as "Let the Memories Begin" and "This is Where the Magic Happens." Even the animation films are made to please the parents, with their good morals and some jokes that are meant for the child not to understand. In addition, the Disney Store has its own Home Decor department which is intended to satisfy the parents' wants as well as their children's, while the child is browsing through the toys, the parent is browsing through the Home Decor section.
As you can see Disney does not have one specific target market, it focuses on each member of the family. It mainly targets average income families, who live in urban areas. Almost all of the Disney Stores are located in large super-centers and malls; their theme park in the United States is located in Orlando, Florida; and their films as well as consumer products are conveniently priced for the average person. Walt Disney himself said it all when he stated:


"Your dead if you aim only for kids. Adults are only kids grown up, anyway." - Walt Disney
Posted by The Walt Disney Company at 11:12 PM 76 comments:

Disney Specials Only During the Holiday Season

Mickey's Very Merry Christmas Party
"A Special Event held each winter at Magic Kingdom® Park on select nights. This festive celebration is filled with live entertainment, spectacular fireworks and an oh-so-jolly holiday parade."
Disney Store Holiday Promotions
"Choose from Holiday Décor, Holiday Ornaments, Holiday Clothes, Top Toys, and Great Gifts for Girls, Boys, Women, & Men while saving 20% off your entire purchase as well as Free Shipping on your order of $75 or more only at the Disney Store." 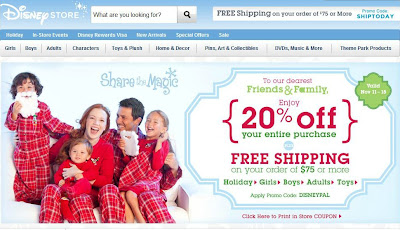 Posted by The Walt Disney Company at 5:50 PM 5 comments:

Today, the Walt Disney Company is known as the most prestigious family brand in the world. The company has been around since the 1920s, and it has proven to be one of the top innovative firms. Due to its long and enduring history, Disney has basically done it all: from animation, to theme parks, to consumer products, to having their own network - you name it and I can assure you that the Walt Disney Company has done it. Since Disney is such a large conglomerate, I will only be focusing on its animation line.

The Walt Disney Studios' profits mainly come from additions to existing product lines. In other words, their profits come from new products that supplement the firm's established line. The new products being new movies and the established line being the animation line. On Movies | Disney.Go you can clearly see what I am talking about, the site consists of a "Coming Soon To Theaters" section and a "Coming Soon On Blu-Ray & DVD" section as well. Some of the new and upcoming theatrical releases are The Muppets, The Beauty and the Beast 3D, and The Secret World of Arrietty.

Disney's Consumer Products division also affects the animation line's profits. The DCP goes hand in hand with the Walt Disney Studios division because as soon as a new movie is created, the DCP creates consumer products based on these new characters. These products are usually clothing, play sets, plush toys, dolls, action figures, and costumes which can all be found in the Disney Store. This is considered adding new products to a product line extension.
In regards to the animation aspect of the Walt Disney Company, adding new products to existing product lines is the only innovation they do. They may not always have "new-to-the-world" products, but they always put their creativity to the test and make sure they develop new products whether they are for a new product line, or simply an addition to an existing one. As their mission statement clearly states "Creativity + Innovation = Profits."

Posted by The Walt Disney Company at 4:33 PM 65 comments:

Every single corporation must promote their product or service efficiently in order to capitalize themselves. In order to do so, the company must use the "promotional mix" which is a combination of advertising, public relations, sales promotion, and personal selling. After all of that promotion, the company's foremost and primary goal is to have as many consumers possible. What helps reach this goal is the AIDA concept, which stands for the stages of consumer involvement with a promotional message. These stages being: attention, interest, desire, and actions.

Now, the Walt Disney Company has no trouble grabbing the consumers attention due to their vigorous brand name, and excessive advertising through traditional media such as television; radio; newspapers; magazines; billboards; transit cards; and of course we couldn't forget - the internet.

Although Disney attracts plenty of consumers, this simple awareness isn't enough to make a sale, they must create an interest in the product. Through various public relations, Disney captures many of its consumers interests. These relations range from environmental issues, to public health and safety issues, to even educational issues. They are currently running two educational campaigns called the "Disney's Leadership Experience: The Inside Track" and "Disney Dreamers and Doers Program."

Now that company has captured the consumer's attention and interest, Disney must entice a desire for the product. For Disney's animation films, desire is mostly brought upon by the emotion the movie trailer gives off. This "emotion" depends on what genre the movie is, and makes the consumer feel as if they "have" to watch the film. For instance, Disney's live-action films give off an exciting, want-to-know-what-happens-next kind of feeling. Animation films on the other hand, give off a heart-warming, family enriched sort of feeling. These feelings encourage the consumer's desire to purchase tickets for the film.

In regards to action, the Walt Disney Company uses "mass communication" which involves communicating a concept or message to large audiences. Studies have shown that consumers usually buy products if they hear or read positive reviews on the product by other consumers as opposed to the actual company. Disney has taken note of this and on it's website it has a section specifically designed for new movie releases, and feedback on these new releases - this section is called Movies | New & Classic Disney Films. Not only does Disney incorporate personal feedback through it's website, but it also has a Facebook, Youtube, and Twitter page. Indeed, the Walt Disney Company has completely convinced many consumers to take action.


According to the Letter to Shareholders in The Walt Disney Company's Annual Report 2010, the "Net income attributable to Disney for the year increased 20 percent to $3.96 billion on a 5 percent rise in revenue to $38 billion. Diluted earnings per share for the year increased 15 percent to $2.03 from $1.76." The company has definitely used the AIDA concept wisely in 2010.
Posted by The Walt Disney Company at 11:01 PM 6 comments: